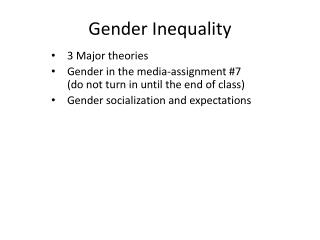 Gender Inequality. 3 Major theories Gender in the media-assignment #7 (do not turn in until the end of class) Gender socialization and expectations. Structural-Functional Theory: Division of Labor.

Social Inequality - . &quot;...all animals are equal here, but some are more equal than others.&quot; [g,orwell,

Gender Inequality - . introduction to gender inequality. there is no nation where women and men are equals. a history of

Warm-Up: 12/5 - . does gender inequality exist in this country? in other countries? explain your opinion!. cultural

Gender Related Issues in the US: Exploring Gender equality and equity in the Teaching and Learning of Mathematics and