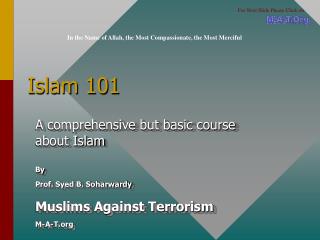 For Next Slide Please Click on. M-A-T.Org. In the Name of Allah, the Most Compassionate, the Most Merciful. Islam 101. A comprehensive but basic course about Islam By Prof. Syed B. Soharwardy Muslims Against Terrorism M-A-T.org. M-A-T.Org. Introduction. Introductions Logistics

Islam 101 - . overview. the muslim creed scene from the movie “the message” the five pillars of islam the first call

Islam 101 - . overview. the muslim creed scene from the movie “the message” the five pillars of islam the first

Islam 101- An Introduction to Islam/Beyond the Middle East - . this session will discuss the basic tenets of islam the

Islam - . part four of the world religions series sponsored by the a-b tech diversity committee. history. the founder and

Islam - . outcome: islam today. islam in the world today…. islam today.  a statistical look today there are over 1.2