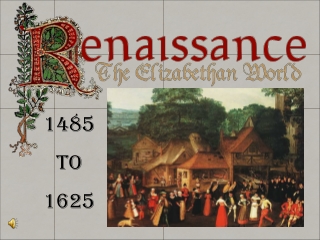 Elizabethan Renaissance 1485-1625 - . research. what would be important for us to know that may have an effect on the

The English Renaissance (1485-1625) Adapted from: Prentice Hall Literature The English Tradition - . the renaissance was

449-1485 - . the middle ages. overview. time of enormous upheaval and change in england. some of most famous and infamous

1485-1660 - . taking notes. it is essential that you take notes on these slides. all of this information will be included

Different Worlds Meet Beginnings to 1625 - . unit 1. critical thinking. george washington was the first president of the