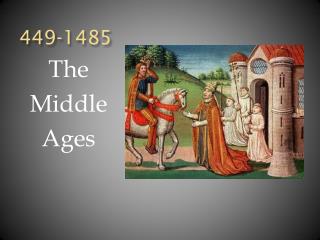 449-1485. The Middle Ages. Overview. Time of enormous upheaval and change in England. Some of most famous and infamous kings in the history of England. Disastrous wars, both internal and external Foreign invasions Reconsolidation and emergence of England as an important nation. From Legend to History (A.D. 449-1485) - . the conquest of britain. two groups of celts from southern europe invades

The Anglo-Saxon and Medieval Periods 449-1485 - . julius caesar conquered england and claimed it for rome in 55 b.c. when

The Anglo-Saxon and Medieval Periods: 449–1485 - . the origins of a nation. historical context. from its very

We’re finishing the Anglo-Saxon and the Medieval Periods 449-1485 - . note: the medieval period = the middle ages. king

1485-1660 - . taking notes. it is essential that you take notes on these slides. all of this information will be included