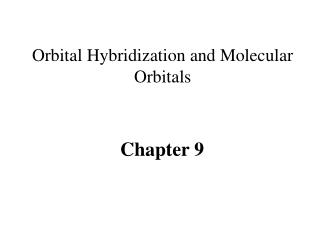 Molecular Orbital Theory - . or when electrons don’t like sitting between atoms!. molecular orbital theory. in the

Hybridization Theory - . says that atoms involved in the formation of covalently bonded molecules will undergo structural

Hybridization - . the ins and outs. are you good to go?. can you answer the following questions? if you can, then you