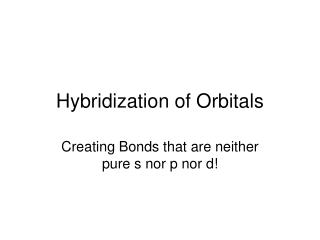 Hybridization of Orbitals. Creating Bonds that are neither pure s nor p nor d!. Valence Bond Model. Linus Pauling developed valence bond theory/model in the 1930’s and won the Nobel Prize for his work in 1954 A covalent bond is a pair of electrons with opposite spins 1s 2s 2p x 2p y 2p z

sp Hybrid Orbitals We assume that the Be orbitals in the Be-F bond are 180  apart. - Hybrid orbitals. sp hybrid

Hybrid Orbitals - . sigma bond ( σ). covalent bond which the electron density is concentrated symmetrically along the

Hybridized Orbitals - . v-b theory can’t explain some observations about molecular compounds without the concept of

Hybridization - . part 2: practice. objective today i will be able to: predict the molecular shape of a molecule using