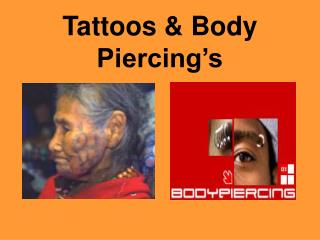 Tattoos & Body Piercing’s. Tattoo History. The word tattoo comes from the Tahitian “ tatu ” which means “ to mark something .” Originally called “ painting ” or “ staining ”

Muscles of the Body - . chapter 11. interactions of skeletal muscles. the arrangement of body muscles permits them to

SKIN ART - . the term “ body art ” is actually a broad term used to describe any method of expression that alters the

Office of International Education - Maximize your experience ... piercing the bubble by engaging the globe. office of

Theology of the Body - . part i patristic thought, the reformers, eugenics, casti conubii and humanae vitae.