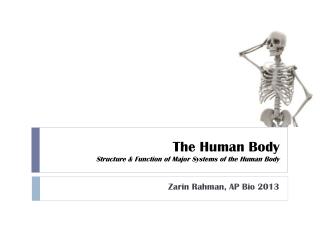 The Human Body - . the skeletal system. click on the skeleton to continue!. today we are going to play a game to practice

Chapter 1 The Human Body: An Orientation - . define anatomy and physiology . anatomy study of the structure and shape of

Cell Analogy Project - . purpose: to compare the structure and function of cells with a familiar system. directions: you