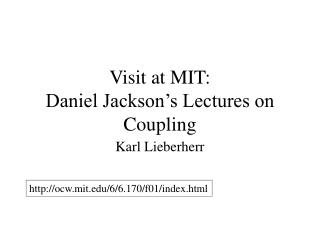 Visit at MIT: Daniel Jackson’s Lectures on Coupling Karl Lieberherr http://ocw.mit.edu/6/6.170/f01/index.html Decoupling I and II Daniel Jackson (son of Michael Jackson, author of the Jackson Design Method) has two lectures on coupling in his SE class.

HCM - . by nick jackson. case. 71 year old man who initially presented to his gp in the year 2000 with lethargy and sob.

Drawing Inferences: What does this story tell you about Jackson and Bean?

Where We Have Been - Seattle. denver. kansas city. memphis. charlotte. jackson. orlando. baton rouge. where we have been.

Stress Is modern life really rubbish or are we just complaining too much? Dr. Craig A. Jackson Occupational Psychologis