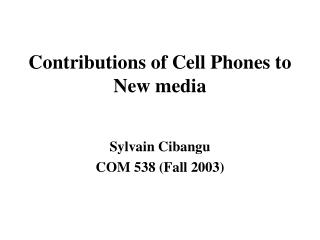 Introduction to PowerPoint 2007 (PPT) - . statement of responsibility (when, for whom, by whom). selecting, adding

History of Cell Phones - . by tim douglas class: mr. cline period: 4. the cell phone. a cell phone is a

Cell Phones and Smart Phones - . casey g. to turn your phone on and off…. to turn it on, press and hold the green /

Cell Phones Past to Present - . by: alyric knight. introduction. i choose this topic because i would like to know how

The History of Cell Phones - . by taylor jones. introduction. i have chosen to do my project on the hiistory of cell