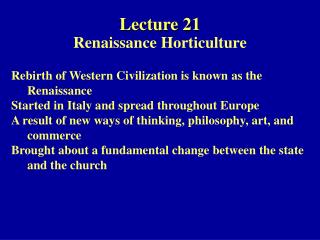 Lecture 21 Renaissance Horticulture Rebirth of Western Civilization is known as the Renaissance Started in Italy and spread throughout Europe A result of new ways of thinking, philosophy, art, and commerce Brought about a fundamental change between the state and the church

The Beginnings of Civilization - . 3,700,000 to 587 b.c. exploration of prehistory. hominids www.houseofcanes.com/