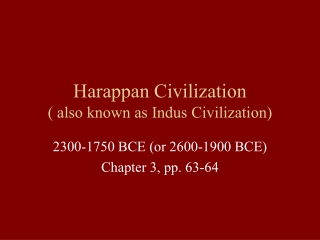 Harappan civilization - Harappa civilization has extensive trade links with mesopotamia. the gold was exported from

M apping the harappan civilization - . i can locate and describe the major river system and discuss the physical setting

The History and Culture of South and Southeast Asia - . the indus valley civilization. around 2500 bc, the harappan

Indus Valley civilization - . ancient studies. who am i and what am i thinking?. who am i?. how would you make this

INDUS VALLEY CIVILIZATION AND EARLY ARYAN SOCIETY - . where is it?. the geographic setting. indian subcontinent to north:

Warmup - . describe the hierarchical structure of a typical neolithic civilization. questions we should answer. what is a