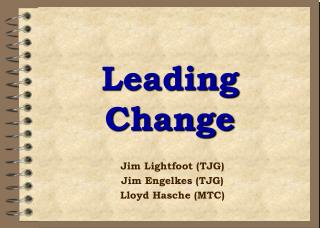 Leading Change. Jim Lightfoot (TJG) Jim Engelkes (TJG) Lloyd Hasche (MTC). How do you respond to change?. An Exercise about change based on a Ken Blanchard /seminar. The Seven Dynamics of Change. Feeling awkward Thinking about what they have to give up Feeling alone

Leading Change - . and. l earning to love it!. the change. you. california dreamin. chill out. yellowknife. no where.

Leading Change - . why transformation efforts fail. adapted from a presentation by hooman mehrdadi. outline. the

Leading Change - . your role in improvement. “when we are dealing with people, let us remember we are not dealing with

Leading Change - . supervisors meeting regional municipality of wood buffalo january 28, 2013. who am i?. started as

Leading Change - Ministry advantage. leading change. the human side of change. lessons learned: every step toward