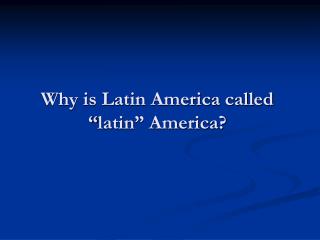 Why is Latin America called “ latin ” America?. The ancient Roman Empire spoke Latin from 100B.C.-400 A.D. They controlled what is modern-day France, Spain, and Portugal After the fall of the empire, Latin turned into French in France, Spanish in Spain, Portuguese in Portugal

Broadening the Debate: The Pros and Cons of Globalization - . shea jones. about the author. specialist in international