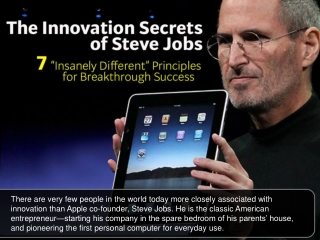 The Innovation Secrets Of Steve Jobs There are very few people in the world today more closely associated with innovation than Apple co-founder, Steve Jobs. He is the classic American entrepreneur—starting his company in the spare bedroom of his parents’ house, and pioneering the first personal computer for everyday use.

The Innovation Secrets Of Steve Jobs