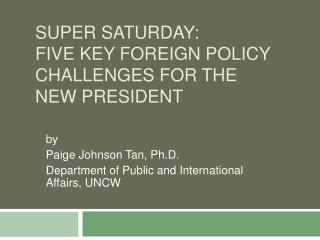 SUPER SATURDAY: Five Key Foreign Policy Challenges for the New President. by Paige Johnson Tan, Ph.D. Department of Public and International Affairs, UNCW. What Do You Think?. What do you think are the top five foreign policy challenges the US faces?. President Obama’s Foreign Policy.

I. Jefferson’s foreign policy problems - . jefferson won re-election by a landslide (without burr); d-r grew as the