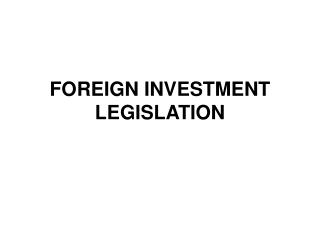 FOREIGN INVESTMENT LEGISLATION. Under Article I of the Foreign Investment Law. foreign investors can be : foreign legal persons; foreign citizens, including stateless persons; Russian citizens permanently residing abroad who are registered in their country to engage in commerce; Foreign Investment - . main points to learn:. what is the connection between investment and economic growth? what is net

FOREIGN DEBT &amp; FOREIGN INVESTMENT - . foreign debt. foreign debt may be defined as the amount of money that a

Foreign Direct Investment - . question for today: why does investment capital flow from some economies to others?. why

Foreign Direct Investment - . contents. eligible investor to india entities into which fdi can be made types of