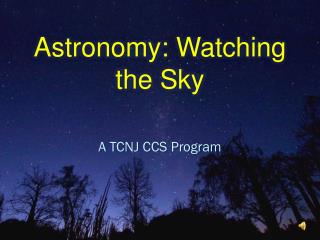 Astronomy: Watching the Sky. A TCNJ CCS Program. Contents. Class 1: From Astrology to Astronomy – The history of looking up at the sky. Class 2: A Trip Through the Solar System – Planets, Moons, and Comets. Oh My! Class 3: The Big Bang and the Universe – The history of everything

ASTRONOMY - . the study of celestial objects, space, and the universe considered one of the oldest disciplines of science

Astronomy Applications in the TeraGrid Environment - Roy williams, caltech with thanks for material to: sandra bittner,