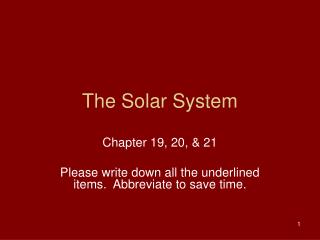 The Solar System. Chapter 19, 20, & 21 Please write down all the underlined items. Abbreviate to save time. What is Astronomy?. 1. Astronomy is the study of the universe.

Gravity &amp; Orbits - That’s the trouble with science. you’ve got a bunch of empiricists trying to describe

The Solar System - . december 13, 2010. warm up (review). what determines the composition of a mineral? what is cleavage?

Asteroids, Comets and Meteorites - . important points. small objects in the solar system are leftovers that never

The Solar System - . the milky way galaxy. our solar system is part of a family of stars called a “galaxy.” our