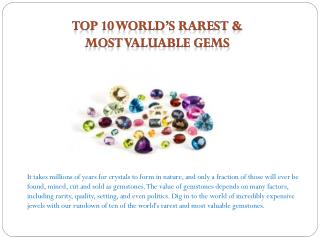 What are the most valuable gems in the world according to both rarity and price? As we all are aware about diamonds, rubies, sapphires and emeralds that fall on the list. Let’s have a look at some particularly unique species of these stones as well as others you may not be as familiar with.

Discover how you can reach the audiences that matter most to your business - With more than 400m members, linkedin is

SILK WORMS - . silk worms. silk is another valuable product from the insect world. the silk is obtained as fine threads