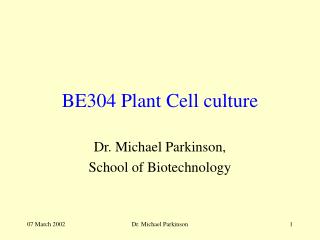 BE304 Plant Cell culture. Dr. Michael Parkinson, School of Biotechnology. ASSESSMENT. One hour open book exam 2 experimental protocols in plant cell culture. You should minutely dissect these and make sense of them. You will get 2 marks for every valid point that you make. Plant Cell - . cytoplasm key process = metabolism – all the chemical reactions that take place in the cell. jelly like

Cell Culture - . basics of cell culture. cell culture is the process by which prokaryotic, eukaryotic or plant cells are

Cell Culture - L ifetechnologies.com. cell culture. what is cell culture?. removal of cells from an animal or plant and

Plant Tissue Culture - . what is it?. tissue culture is the term used for “the process of growing cells artificially in

Plant Tissue Culture - . definition:. the term plant tissue culture is described in vitro and aseptic cultivation of any