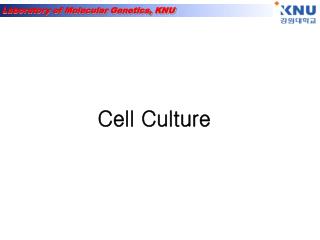 Cell Culture. Basics of Cell Culture. Cell culture is the process by which prokaryotic, eukaryotic or plant cells are grown under controlled conditions. But in practice it refers to the culturing of cells derived from animal cells. Cell Culture - L ifetechnologies.com. cell culture. what is cell culture?. removal of cells from an animal or plant and

hESC Cell Culture - . lab week 1 overview. tuesday (1.5h) lab safety and finding your way around the lab learn how to use

Cell Culture Medium - . since 1950s, tissue culture media were developed and conditions were worked out which closely