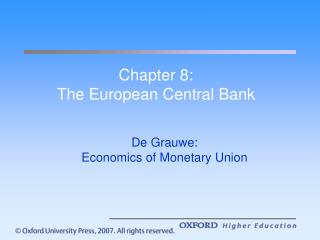 Central Banks and the Bank of Canada - Mishkin/serletis the ecoznomics of money, banking, and financial markets fifth

THE CENTRAL BANK INTRODUCTION - . central bank is the most powerful economic institution of country. central bank

Chapter 8 The Presidency - Natural-born citizen, 35 years old, and a resident of the us for at least 14 years. 4 year

The European Central Bank - . presentation by: group 4. organisation. the ecb is the central bank for europe's single

Lecture 9: Structure and function of Central bank (Federal reserve) - . the lecture’s aim is to make the students