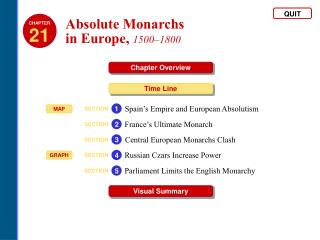 The Rise of Austria and Prussia - . two german-speaking powers that perfected the skills of being absolute monarchs. the

ABSOLUTE MONARCHS - . chapter 21. who are absolute monarchs?. kings or queens who held all power within their states’

Absolute Monarchs - . divine right and the rise of absolutism. definitions and impact. absolutism - when a ruler reigns

Effects of the Enlightenment on the World - . “enlightened monarchs”. most of europe ruled by absolute monarchs

Absolutism in Europe - . swbat: explain absolutism and identify absolute monarchs. homework: none do now: answer the

WHAT DOES THE WORD ABSOLUTE MEAN? WHERE DOES THE POWER TO RULE COME FROM? WHY IS THAT IMPORTANT? - Eq. what does the word

Age of Absolutism - . (1660-1787). what is absolutism. period of time when europe’s monarchs got stronger caused by the