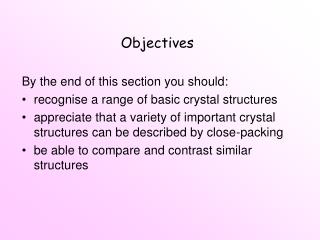 Objectives. By the end of this section you should: recognise a range of basic crystal structures appreciate that a variety of important crystal structures can be described by close-packing be able to compare and contrast similar structures. Unit cell (cubic). symmetry. Why?.