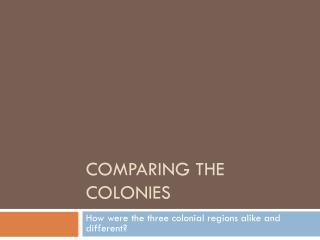 Comparing the Colonies - . words to know. economy. a system of money and all the businesses, industries, farms, and so on

The Colonies - . remember, some people in england moved to the new american colony. this was a new place. the english

The Colonies - . us history ms. naghizadeh. the 13 colonies. it all began with the settlement of virginia in 1607. a

The Colonies - . section 1.4 northern, middle, and southern colonies. create your new colony. you have found a new

Middle Colonies “The Restoration Colonies” - . ethnically diverse group. new era in colonization why are the middle

The Spanish Colonies - . born a native. born as a native in 1525 south of the central valley taunted and brutalized by

The Northern Colonies - . 1601-1700. roger williams and the puritan church . what did he believe about the indians, and

The Southern Colonies - . bell-work… listen to the following song please write what you think the song is about…