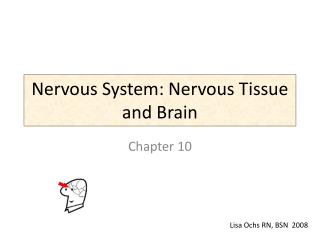 THE PERIPHERAL NERVOUS SYSTEM AND REFLEX ACTIVITY - . pns in the structural organization of the nervous system. sensory

Autonomic Nervous System - . a. comparison of somatic and autonomic nervous systems b. anatomy of autonomic motor

The Peripheral Nervous System - . chapter 14. introduction. the cns would be useless without a means of sensing our own

Chapter 2 - . powerpoint questions. q1. neuroscience. a1. a branch of the life sciences that deals with the structure and