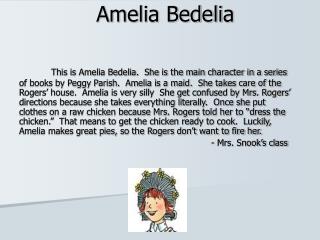 Idioms - . an idiom is a word or phrase which means something different from what it says (saying one thing but meaning

PEGGY PARISH - Amelia bedelia. peggy parish. peggy parish was born on july 14, 1927. it was this love of reading that

Idioms - . weather report for today: it’s supposed to rain cats and dogs!. an idiom is a phrase or expression that has

CLAD Through CTEL Portfolio - . constance murtaugh for the university of california san diego extension. table of

Finding Fiction - . aisb library, mrs. ducharme. how to find the books you want in the library!. types of fiction. History and Trends in Children’s Literature - . how can we know how we got here- if we don’t know where we’ve been?

Amelia Earhart - . the first woman to fly around the world.