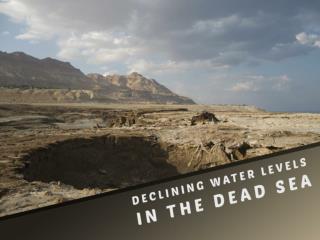 Originally one of the world’s first health resorts, the Dead Seal in Israel has a far from healthy future as its water levels continue to decline. In fact, it has been estimated that since the 1950s the water levels have dropped about 130 feet. The dangerously low level has been attributed to an imbalance between the amount of incoming and outgoing water. Known also as the Sea of Salt, separating Israel to the west and Jordan to the east, the lake’s surface and shores are 1407 feet below the level making it earth’s lowest elevation on land. The problem of the annual declining rate is due largely to the reduction of inflowing of water from the Jordan River. Water of the Everglades - . presented by: emily kay reeder environmental and water resources engineering; university of

Water of the Everglades - . presented by: emily kay reeder environmental and water resources engineering; university of

Bottled Water vs. Tap Is there really any difference - Lalumandier study: findings . ?while 39 of the 57 samples of

The Resurrection Of The Dead - . the bible clearly teaches the general resurrection of the dead many today deny the

Saving the Dying Dead Sea - . lexia chadwick 22 april 2014. the uniqueness of the dead sea. lowest point on earth at 427

Water Quantity: Puget Sound - . jordan lont. the problem. not enough water for people. they are growing thin on water