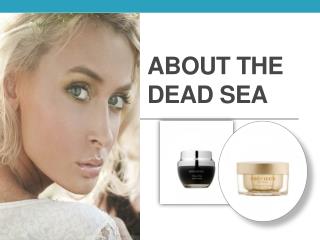 About the Dead Sea

The geography of the Dead Sea is another aspect that is amazing as its surface is 396m below sea level, its shores is the lowest dry point on Earth. The size of it is nearly 402 square kilo meters, located by the West Bank of Jordan and Israel.

About the Dead Sea

Braving the Dead Sea - Athletes and eco-activists swim across the dead sea, the first people to thrash their way over a

Death of the Dead Sea - The dead sea is shrinking, and as its waters vanish at a rate of more than one meter a year,

Declining water levels in the Dead Sea - Originally one of the world’s first health resorts, the dead seal in israel

Dead Sea in Danger - . the dead sea, the saltiest body of water of the earth and wonderful natural treasure, is becoming

The Dead Sea - . location/formation. located between jordan, the west bank, and israel. just outside of the traditional

Saving the Dying Dead Sea - . lexia chadwick 22 april 2014. the uniqueness of the dead sea. lowest point on earth at 427

The Dead Sea Scrolls - . what are the dead sea scrolls?. remains of over 800 ancient manuscripts written in hebrew,

The Dead Sea - . dead sea started its formation millions of years ago with the forming of the great rift, also known as