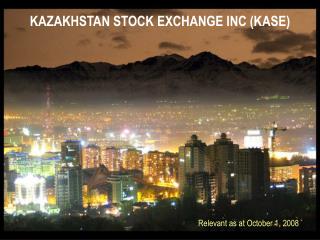 KAZAKHSTAN STOCK EXCHANGE INC (KASE). Relevant as at October 1, 2008. COEVAL OF TENGE …. KASE was established on November 17, 1993 under the name of Kazakh Inter-bank Currency Exchange – two days after Tenge (the new national currency of Kazakhstan) was introduced on November 15, 1993.

Gas Exchange - . chapter 45. learning objective 1. compare the advantages and disadvantages of air and water as mediums

Stock Valuation - . understand how stock prices depend on future dividends and dividend growth be able to compute stock

Let's Talk About Treasury Stock - . an out of class less attempting to make-up for a snow day. topics covered. (click a

Columbian Exchange DBQ - . how did culture in the americas change as a result of exploration? what were the consequences

Want to Know about History of Stock Exchange - The stock exchange was established by east india company in 18th century.