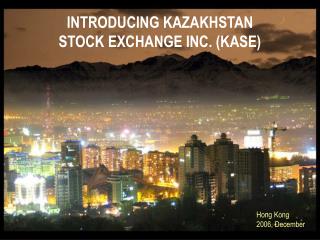 KAZAKHSTAN STOCK EXCHANGE - . kase – coeval of tenge. kase was established on november 17, 1993 under the name of

KAZAKHSTAN STOCK EXCHANGE INC (KASE) - . relevant as at october 1, 2008. coeval of tenge …. kase was established on

Institutionalization of a Chamber of Public Experts under the Parliament of Kazakhstan - . erlan aliev, project manager,

Presentation for Investors - . executive summary. we are pleased to welcome potential investors to this KAZAKHSTAN’s ARCHITECTURE OF THE 21st CENTURY BEGINNING: TRENDS OF FORMS EVOLUTION - Typical examples by Dr. - The