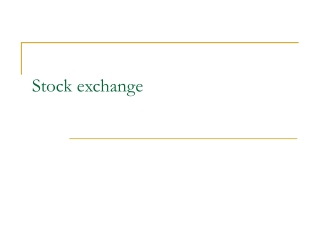 Stock exchange. Stock Exchange. A stock exchange is a corporation which provides facilities for stock brokers and traders to trade company stocks and other securities. The securities traded on a stock exchange include: Shares issued by companies Unit trusts Other pooled investment products The Role and Function of a Stock Exchange - . by enid e bissember gasci. outline. overview of financial markets

Barbados Stock Exchange Inc - . building a better market presented by marlon e. yarde. contents. bse – what do we do

The Stock Market - 5. the stock market. learning objectives. take stock in yourself. make sure you have a good

Role of a Stock Exchange in buying and selling shares? - . trading platform provided by nse is an electronic one and

Prague Stock Exchange in Brief - . prague stock exchange. established in 1993 full member of the federation of the

The Stock Market - 5. the stock market. learning objectives. take stock in yourself. make sure you have a good