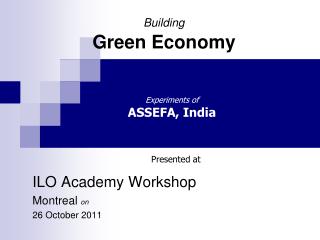 Building Green Economy. Experiments of ASSEFA, India. ILO Academy Workshop Montreal on 26 October 2011. Presented at. Mother ‘The EARTH”. The Mother Earth is a precious gift by nature. All living beings have the right to exist Green Building! - . kyle rogers james ruhland community design studio, llc. what is green building?. with so many ways to

GREEN BUILDING - . green building. refers to a structure and using process that is environmentally responsible and