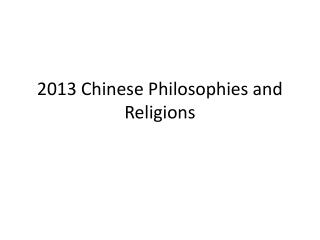 2013 Chinese Philosophies and Religions. What is philosophy?. Literally: a love for wisdom Typically asks Questions like: What is the purpose of life? What is a good person like? What is success? What is truth? What is knowledge? How should I act in a situation?

1.Beliefs and Religions of China - . confucianism taoism buddhism. 2.confucianism. based on teachings of confucius, who

Confucianism - . contributions in forming social order in china. belief that humans are good, not bad respect for elders

Chinese Religion, Chinese Philosophies - . objective:. to understand the age of buddhism in china and how confucianism

RELIGIONS IN USA - . social studies 7b daniel andres clavijo. introduction. religion in the united states is

Chinese Philosophies - . confucianism, legalism, daoism . what is a philosophy?. a system of beliefs or values not based

Class Discussion May 21st, 2014 - . name the 5 greatest philosophers or thinkers of all time. what is the difference (if

Chinese Philosophies - . philosophy - the study of man’s thinking about the meaning of life and truth and from that