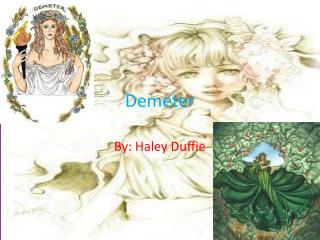 MYTHOLOGY - . you will create a mini poster today with a picture of the god or goddess of your choice and information

Law of Demeter - . law of demeter. what is it: style rule for building systems. proposed by my research group: the

Talk only to your friends that share the same concerns (Law of Demeter for Concerns) - . midterm review february 2004.

Demeter - . goddess of harvest by: lily mainhardt. my name is demeter…. i am also known to many romans as ceres. i am

Persephone - . persephone. daughter of demeter demeter: goddess of the harvest ceres and persephone were close and loved