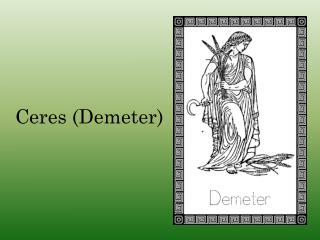 Ceres (Demeter). Cronus m. Rhea. Hestia. Hades. Poseidon. Demeter. Hera. Zeus. Demeter was the daughter of Cronus and Rhea, and is one of the three goddesses of the first Olympian generation.

Demeter and Persephone: The Homeric Hymn to Demeter - The hymn to demeter . was a ?working version" of a myth.used

The Role of NGOs in IO - . an in-depth look at ceres: investors and environmentalists for sustainable prosperity by j. h.

Hades &amp; Persephone - . by: danielle larson. hades. god of. god of death and the dead king of the underworld.