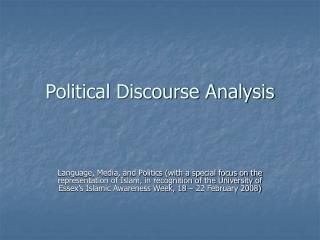 Political Discourse Analysis. Language, Media, and Politics (with a special focus on the representation of Islam, in recognition of the University of Essex’s Islamic Awareness Week, 18 – 22 February 2008). Sociolinguistics LG232. The last 5 weeks (Part 1) we have looked at: