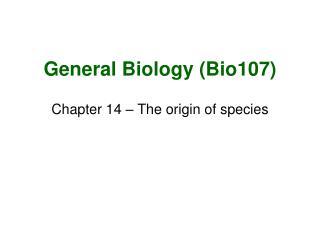 General Biology (Bio107). Chapter 14 – The origin of species. Speciation & Species. Darwin recognized that the young Galapagos Islands were a place for the genesis of new species. The central fact that crystallized this view was the many plants and animals that existed nowhere else. General Biology - . properties of water. i. water is an important topic to biologists life on earth probably evolved in

General Biology - . inorganic chemistry. i. chemical elements and compounds a. elements consist of only one kind of

General Biology - . a tour of the cell. i. what is a cell? a. the cell theory 1. the fundamental units of both

General Biology Bio 1 - Biology: what is life?. why are you taking this course??for most of you, it is a