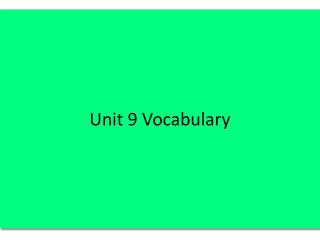 Vocabulary Unit 2 - . available a vai la ble). definition (adj) ready for use, at hand the room was available for

Space Exploration Unit 9 - . critical vocabulary. inertia. inertia is the resistance of any physical object to any change

Vocabulary Unit 1 - . from the catcher in the rye. ostracized. os·tra·cize [ os-truh-sahyz ] verb (used with object),

Vocabulary unit 5 - . before a big storm, it is important to have ample supplies of what?. our bill of rights means

Vocabulary Unit 9 Level F - . abate. v. – to make less in amount, degree below – waiting for the fire to abate.

Vocabulary Unit 9 - . caustic: adjective- able to dissolve or eat away by chemical action. sharp and biting. acid is a

English 3 Unit F1 Vocabulary - . read and follow these directions, but delete them before submitting this assignment: