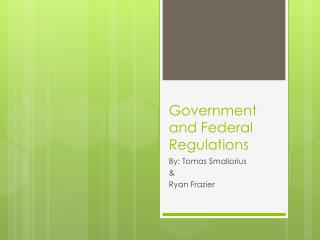 Government and Federal Regulations. By: Tomas Smaliorius & Ryan Frazier. What is the First Amendment. How to Apply for a Federal Job - Finding and applying for jobs in the federal government ... federal jobs are highly

Special Regulations Seminar January 2009 - . 1. course explanation &amp; outcomes. the purpose of the seminar is to:

Chapter 2 - Pharmacy federal laws and regulations. chapter 2. introduction. practice of pharmacy is governed by series of