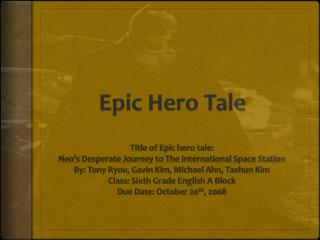 Beowulf - . the epic tale. definition of epic hero. an epic hero is the central figure in an epic that reflects the

Beowulf is an epic - . an epic is a long poem about a larger than life hero. characteristics of an epic:. a loyal hero

Epics and Epic Heroes - . bell work : ( 4-5 sentences) ! what makes a hero? what are four qualities a hero must possess?.

Myths, Epic Tales, and Storytelling - . oral tradition. the sharing of stories, cultures, and ideas by word of mouth.

That’s Epic, Dude! - . an introduction to the odyssey and homer. what do we mean when we say, “epic”?. an epic is a

The Hero’s Journey - . 1) ordinary world –the hero’s normal life and world before the story begins shrek is living

Beowulf - . the epic. what is beowulf ?. epic: a long poem telling a story about a hero and his exploits. components of

The Hero’s Journey - . what is a hero?. character who is brave selfless – risk taker demigod – offspring of a god

The Hero’s Journey - . joseph campbell described the hero’s journey as a circle – starting with the call to