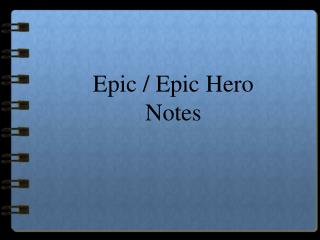 Epic / Epic Hero Notes. Epic Definition. An epic is a long narrative poem that relates the great deeds of a larger-than-life hero who embodies the values of a particular society. -Sometimes called a heroic poem - Beowulf, the Iliad , and the Odyssey are all epics. Epics often…. The Greeks - . chapter 4 review. bronze-using peoples who lived on crete. who are minoans?. body of water that greeks

UNIT 6: - . we could be heroes. d ifferent heroes…. 3 different types of heroes this unit will examine: . d ifferent

Item #31-Literature - . in medias res. this is a latin phrase, which literally means “ into the middle of things.”