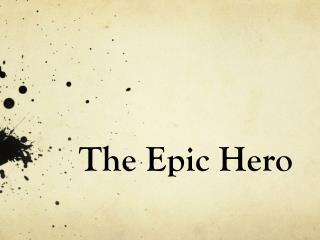 The Epic Hero. What is a Hero?. epic |ˈ epik | Adjective heroic or grand in scale or character: his epic journey around the world | a tragedy of epic proportions . DERIVATIVES epical ( adjective) epically |-( ə ) lē| adverb

Epic and Epic Hero - . the odyssey. warm up. what qualities make someone a hero? can you think of any modern-day heroes?.

The Epic Hero: The Journey - . prepare for notes. take a sheet of notebook paper out. fold the paper in half vertically

The Epic Hero - . traits. values are representative of the society fights for noble causes has above average

The Epic Hero - . what do they all have in common?. characteristics of the hero. has larger than life qualities possibly

The Epic, The Epic Hero, and The Epic World In Media - . prof. q ut arlington. the world of the epic. the iliad – the

The Epic and the Epic Hero - . pre- beowulf notes. you know the story…. people are living in fear as an evil force

The Epic, The Epic Hero, and The Epic World - . prof. q ut arlington. the epic – what is an epic?. a long narrative.

The Epic Poem &amp; The Epic Hero - . epic. a long narrative poem that relates the great deeds of a larger-than-life

An Epic Hero - . beowulf is ancient england’s hero, but he is also an archetype , or perfect example of an epic hero

Analyzing the Epic Hero Cycle &amp; Epic Elements - . beowulf. what is a monster? . you must have at least 1!. act

Epic Hero Notes The Odyssey - . themes for the odyssey. loyalty, devotion and courage in the face of great adversity or