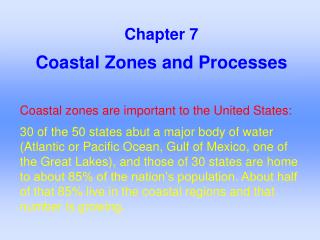 Coastal Zones and Processes. Coastal zones are important to the United States:

Chapter 20 Coastlines and Ocean Basins - . about coastlines and ocean basins coastal processes are the interaction of

Coastal Processes - . lesson 1. lesson aims: what is the coast? what is meant by a coastal system? what are the inputs,