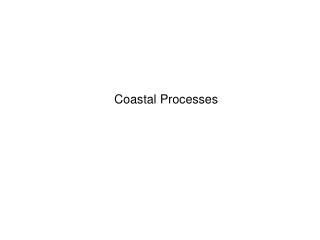 Coastal Processes - Compression : air is trapped between the waves and a cliff. this is compressed &amp; driven into

Louisiana Coastal Erosion - . rate of land loss. each year, louisiana loses about 25 square miles of land due to coastal

Coastal Processes and Observations - . what is a beach?. different things to different people strip of unconsolidated

Coastal Landforms - Erosion - . starter spelling test: learn the following spellings that you will be tested on now!

Coastal Erosion - . holderness coast. look at each images and state which of these cliffs is most prone to attack. barton

Coastal Erosion - . learning objectives. to be able to define the five processes of marine coastal erosion . to be able

What landforms are created by coastal erosion? - . headlands and bays. headlands are formed when the sea attacks a

Coastal erosion - . what part of the uk coastline is this?. aim: to understand the four types of erosion and give an