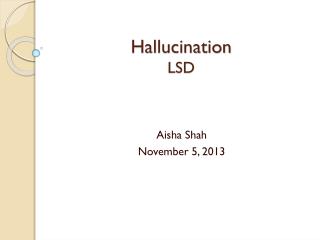 Acid(LSD) - . by: josh rolfe &amp; john brown. the history of lsd. a chemist working for a pharmaceutical company

Hallucinogens: LSD - . by: tiffany dharia lauren markovich neetu nirappil yena lee. what are they?. hallucinogens are

Hallucinogenics: Acid, Dust and ‘ Shrooms - . psychology 3506. introduction . basically, substances that, at less than

The Truth About LSD (lysergic acid diethylamide) - . by alix templeman, taylor raphael, and ben overzat. what is

What is a Hallucinogen? - . abraham et al , (1996): “any agent that causes alterations in perception, cognition, and

LSD - . and its effects on the human body and mind . lsd’s other names and how it is taken. lsd (lysergic acid

HALLUCINOGENS - . wendy mcgurk. what are hallucinogens. hallucinogens are a group of drugs that work on the brain to

Hallucinogens - . what is a hallucinogen?. psychoactive drugs mostly made from mushrooms and plants changes in:

Hallucinogens - . get the facts. what are