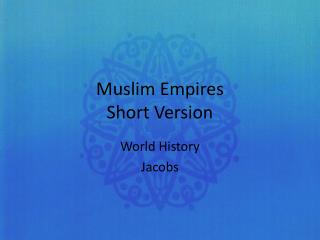 Muslim Empires Short Version. World History Jacobs. D11 Essential Questions. How were the cultural achievements of the Europeans during the Renaissance comparable to those of the Ottomans and Mughals /Moguls at the same time?

Muslim Empire and Coexistence - . arabic invasion. 711 tarik crosses the strait of gibraltar. summary of periods of

Essential Question : Who was Muhammad &amp; how did Islam unite the Arab people? Warm-Up Question : - Read the

The Muslim Empires - . the ottoman, safavid and mughal (or mogul). ottomans: beginning. started on anatolian peninsula in

Aim: How did the Islamic Empire affect the societies which it conquered? - Analyze the map of the spread of islam. to

The Biggest Achievements of the Four Empires of Mesopotamia - . by joshua darrish. essential question. what were the most

Powerful Muslim Empires - . islamic invasion. after the gupta empire fell in 550, india was divided into many little

Chapter 20 – The Muslim Empires - . the rise &amp; spread of the ottoman turks the safavid empire the mughal

Safavids and Mughals - . chapter 20. house quiz!. who were the ancient rivals of the safavids they defeated? under which