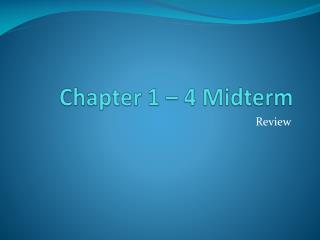 Chapter 1 – 4 Midterm. Review. Rules. Answer only when called upon Rotate when question is answered correctly Bonus round questions can be answered by entire team Midterm Budget Adjustments Summary - . facing the economic realities of our times. the longest period of national

EE 334 Midterm Review - . diode: why we need to understand diode?. the base emitter junction of the bjt behaves as a

Midterm Exam Review Game UNIT I: Enhancing and Evolving to “Perfection”? - . which one of the following was not a