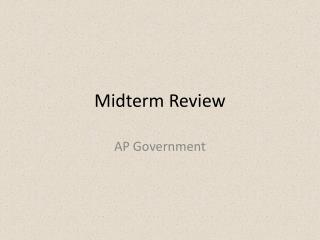 Midterm Review. AP Government. Principles of Government. How Governments Are Different?. Who Governs? Autocracy – one Oligarchy – small group of landowners, military officers, or wealthy merchants Democracy – Majority of population have influence over decision-making Midterm Review - How did the great depression of the 1930s increase racial, ethnic and religious conflict in us history?.

Midterm Review - . pu515 – applied biostatistics dana colbert-wheeler, mha, mches. how are you all feeling about the